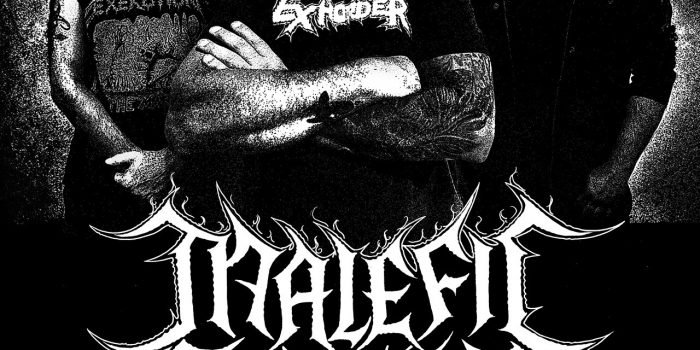 Agonia Records is proud to announce the signing of the American black/death metal band MALEFIC THRONE to its roster. After a first EP released in January 2022, the trio – Gene Palubicki of Angelcorpse and Perdition Temple fame on guitar, Steve Tucker from Morbid Angel on bass and vocals, plus former Angelcorpse and current Origin and Hate Eternal drummer, John Longstreth – is now hard at work on their debut album, to be recorded in 2023. 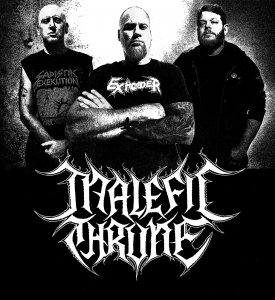 „We are very excited to take this monumental step forward with Malefic Throne” says John Longstreth. “This bands roots can be traced all the way back to the mid 90s when Gene, Steve, and I first met at Morrisound studios. It’s an amazing feeling to see those old conversations and hang outs develop into what will be a true celebration of blistering infernal death metal. Agonia Records understands the true weight and density of what the three of us wish to present to the world and I have no doubt that this union will be absolutely crushing.“ Adds Palubicki: “It is a great feeling to have our work, despite being at essentially its very beginnings, be recognized and now supported through Agonia. It will be quite thrilling to see what reach Malefic Throne might achieve through Agonia Records.” Steve Tucker declares to be “stoked to get the opportunity to expand on the ideas that we started with Malefic Throne, a big thank you, goes out to Agonia Records for this creative platform. Gene, John and myself will be putting together some chaos for the mind!“

The band was put together by Palubicki in 2020 after he was done writing the latest Perdition Temple, bringing on the table his own very distinct ‘bestial’ flair yet with a twist on its own. He immediately thought of his former Angelcorpse colleague John Longstreth for the drums. Looking for a towering presence for the vocalist position, the pair then turned their attention towards Morbid Angel’s Steve Tucker, whom they had initially met at Morrisound in 1997, when both Angelcorpse and Morbid Angel were recording side to side their own albums. Gene remembers that “on the weekends during all this, we met up at Trey Azagthoth’s house for barbecue, booze and so on. Great times! So we all knew from years ago that we could get along and do something like this. Once we started talking together about doing this stuff, it was great to have an opportunity to participate in a musical work with Steve, and also to reunite on a project with John after all these years as well.”

Palubicki stresses out that the music produced by MALEFIC THRONE “has the imprint of all three of us very present in every moment of the songs. As much as one identifies what they might think as ‘signature’ in my sound and fashioning of music, the same can be said for the performances and work done by Steve and John as well. The synthesis of the three of us through delivery and writing is what makes Malefic Throne its own entity.” Musically speaking, Gene says that he’s trying “to do some things that are somewhat foreign to what I might ever do within the frame of say, Perdition Temple. The nature of some of the musical patterns differs at times deliberately. I also keep in mind to try to weave in nods to the history and legacy of all the members‘ past as well. So there are moments where you will clearly hear relative elements.”

Ever since their self-titled debut EP – three originals plus one ripping Sodom cover (“Nuclear Winter”) sang by Palubicki – hit the shop, the band has been moving forward and working on new songs, as to show the rest of the world that this was not a one-off thing but an actual, proper band. “For the upcoming full-length, we plan to have an increased immersion of all members into the writing. I feel we will have that much more of an increased dynamic within the form of death metal music we generate. I’m trying to go to some places with riffs and songs that are completely something away from all past stuff, including past bands and works. You’ll even find some real creeping horror stuff dragging into 8 minutes songs! But of course, on the flip side of that thinking, I make sure to go for some berserk sounds that really get OTT as well. But it is an interesting challenge to expand the boundaries of what defines each of my band’s works, and I’m quite excited where the new Malefic Throne material is evolving to.”