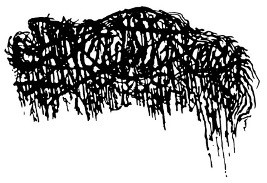 „This song is about a face being ripped off so we called it ‚Face Ripped Off,'“ the band says.