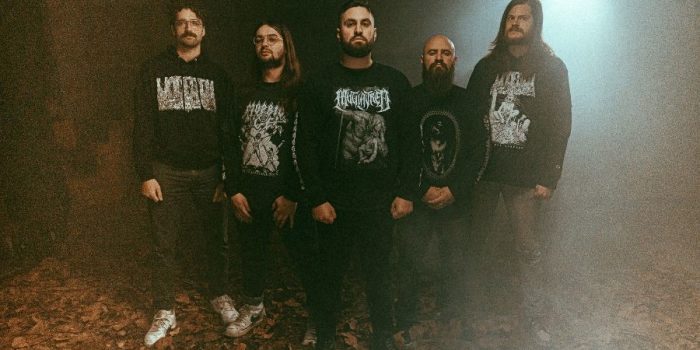 Rochester, NY death metal band UNDEATH have today been announced as the cover feature for Decibel Magazine’s year-end issue, with their latest album, It’s Time… To Rise From The Grave, being named as the publication’s album of the year. Coinciding with the cover feature, UNDEATH have also shared a new live album, Live… From The Grave, recorded and filmed at Pops in Sauget, IL. 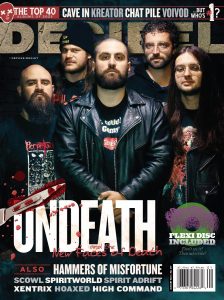 Live… From The Grave is available on all digital streaming platforms now, with a physical release planned for 2023 via Prosthetic Records. Of the live album announcement, vocalist Alexander Jones comments: „Stoked as fuck to announce our first ever LIVE ALBUM, Live… From The Grave, We’ve been huge fans of killer live albums like ‚Live Cannibalism‘ and ‚Unleashed in the East‘ forever and considering the fact that we’ve been touring consistently for the past year and a half, we figured there’s no time like the present to drop one of our own!

„The album is taken from our tour supporting Dying Fetus this past spring and highlights a bunch of tracks off of It’s Time…to Rise From the Grave. If you can’t catch us live, this is the next best option for you. It’s like we’re right there stinking up your car/living room/cousin’s wedding/wherever you choose to throw this bad boy on…“

On gracing the cover of Decibel, he adds: „We’re also beyond honored to not only be on the cover of the year-end issue of Decibel, but to also have It’s Time…To Rise from the Grave take the number one spot on their Top 40 Albums of the Year list! Insanity.

„We’ve been fans of Decibel for years and, as sappy as it sounds, we used to daydream about stuff like this happening at our very first practices. It honestly still doesn’t feel real, but this shit is as real as it gets! Seriously can’t begin to thank Decibel and everyone who’s supported us this year enough. Shoutout to FUCKING DEATH METAL.“ 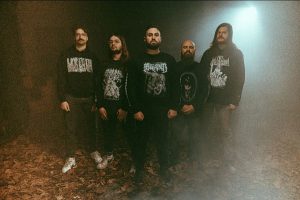 Guitarist Kyle Beam adds: „We were having a blast playing these songs on this tour, and we hope you enjoy listening to them! As a kid, I was introduced to a lot of bands via the cover of Decibel, and now here we are, featured as the cover story. If you’re discovering us from this, we hope you stick around – we’re just getting started…“

In four years, UNDEATH have done the unlikely. They have two celebrated, oft-streamed demos, a coveted Decibel flexi disc, two brutish videos (Acidic Twilight Visions, Entranced by the Pendulum), completed a riotous 30-date American tour mid-pandemic with The Black Dahlia Murder, and released a fan-obsessed full-length in Lesions of a Different Kind. To stop now would be contrary to UNDEATH’s diehard, work-hardened ethos. Indeed, they’re forging ahead. It’s Time… To Rise from the Grave undoubtedly levels up UNDEATH. The New Yorkers are the vanguard of the next wave of hard-hearted American death metal.